THE SEA CAMELS ARE SADDLED WITH PRIZES FOR THEIR ENDURANCE CHALLENGE 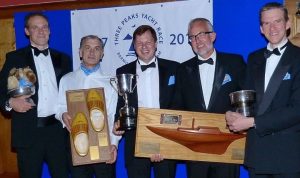 The Sea Camels team, skippered by James Mansell Director of Clear Solutions, sailed to victory and managed to saddle up an impressive number of prizes in this years race! However the best prize of all for the Sea Camels was the fact that they managed to raise a grand total of £8,312.73 for Acorns Children’s Hospice. Thank you to everyone who has supported the team in helping to achieve this grand total for such a worthy cause.

The three peaks yacht race is classed as one of the top ten adventure (endurance) races in the world, this year the team were competing against a number of professional sailors including Dee Caffari and Pip Hare. Half of this years competitors also attempted the even more challenging Tilman version of the race which involves all of the team summiting at least one of the mountains. The Sea Camels team were proud to achieve second place in the Tilman race and were awarded The Bodlyn Cup, further the team achieved a very creditable 8th place over all, which was particularly impressive given that they had the slowest runners out of all the teams but this did mean that they achieved the Kamminga Kloggs award!

Children at the Acorns Children’s Hospice kindly made the Sea Camels flags to decorate their yacht, with the brilliant decorations from the children, the Sea Camels won best dressed yacht and were awarded the British Waterways Bowl.

The Sea Camels proudly won the Wrinkles Trophy for having the oldest combined team age, surely showing the younger teams a thing or two by winning so many awards!

Get in touch to discuss your requirements

Contact us
We use cookies on our website to give you the most relevant experience by remembering your preferences and repeat visits. By clicking “Accept All”, you consent to the use of ALL the cookies. However, you may visit "Cookie Settings" to provide a controlled consent.
Cookie SettingsAccept All
Manage consent

This website uses cookies to improve your experience while you navigate through the website. Out of these, the cookies that are categorized as necessary are stored on your browser as they are essential for the working of basic functionalities of the website. We also use third-party cookies that help us analyze and understand how you use this website. These cookies will be stored in your browser only with your consent. You also have the option to opt-out of these cookies. But opting out of some of these cookies may affect your browsing experience.
Necessary Always Enabled
Necessary cookies are absolutely essential for the website to function properly. These cookies ensure basic functionalities and security features of the website, anonymously.
Functional
Functional cookies help to perform certain functionalities like sharing the content of the website on social media platforms, collect feedbacks, and other third-party features.
Performance
Performance cookies are used to understand and analyze the key performance indexes of the website which helps in delivering a better user experience for the visitors.
Analytics
Analytical cookies are used to understand how visitors interact with the website. These cookies help provide information on metrics the number of visitors, bounce rate, traffic source, etc.
Advertisement
Advertisement cookies are used to provide visitors with relevant ads and marketing campaigns. These cookies track visitors across websites and collect information to provide customized ads.
Others
Other uncategorized cookies are those that are being analyzed and have not been classified into a category as yet.
SAVE & ACCEPT
Powered by